BMS attended the IEMA North East second regional event in 2012 which was a visit to Shotton Surface Mine to learn about environmental management of surface mine facilities.  Hosted by Chris Rush, environment and sustainability co-ordinator of mine owners, The Banks Group, the event was an interesting session for attendees, and included an informative tour of the site operations.

Chris opened the event with a presentation covering the main methods of environmental management at the site.  He outlined the major aspects at the site as:  Air Quality (Dust), Noise, Vibration, Mine Gas, Water Quality and Traffic (heavy plant machinery and transport from site). Chris explained that a key part of the environmental management occurs at the design and planning stage of the site, where mitigation measures are planned and implemented into the design process, alongside requirements arising from permitting and regulations.  Banks aim to design the operation to surpass permitted process levels wherever possible. Planning is backed up with detailed baseline assessments of the site, site emissions testing and impact prediction modelling, which feeds into structural planning measures, such as the location and height of screening mounds on site.

Operational controls are deployed across all the main aspects, with the control philosophy explained by Chris Rush that it is “easier to mitigate at source” than deal with issues after emissions have occurred. One example given was the retrofitting of machinery with acoustic shielding / screening to reduce noise levels beyond those achieved by manufacturers, a technique so successful that sound levels have been reduced by 10 – 15 dB(A).

Regular auditing of key control measures, and environmental management system procedures is undertaken, along with community surveys.  Chris explained that it is “useful to do all the compliance monitoring as Banks can refer back to data and interrogate it” should an investigation be required. 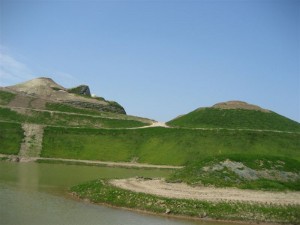 Whilst Shotton is planned to operate until 2017, Banks are already working on landscaping of the site, with the vast land art project Northumberlandia a central part of the project to return the land to public and community use.  Event attendees were able to get up close to this impressive land sculpture during a fascinating tour of the Shotton site.  Standing over 30 metres high, this monumental sculpture of a reclining woman is formed of 1.5 million tonnes of clay and soil supplied from the adjacent   surface mine excavations.  Due to open in late 2012, Northumberlandia is an impressive demonstration of Banks’ commitment to providing a positive legacy at the site, and promises to be an iconic piece of public art to  attract many thousands of visitors to the North East.

The site tour, conducted during normal operations, saw attendees split into two Land Rovers, and travel around the whole site, taking in the deepest level operations.  An impressive amount of machinery is in use at the site, and effective design and planning of screening has ensured that the scale of the operation is not visible from any external location.  Attendees were thrilled to see the largest machine on site, an RH200 excavator, in operation, illustrating the retro-fitted dust suppression sprinklers before posing for a photo beside the huge machine, big enough to allow all 12 IEMA members in the excavation bucket.

Afterwards, attendees commented how interesting and informative the visit had been, and Regional Chair, Marek Bidwell said:

echoing many of the thoughts expressed throughout the event.