Sunset at Lynemouth Power Station – my first night out

My life’s dream has been to explore the world and to observe nature in all its diversity. This was exemplified by a trip to Uganda in 2016 to see the Mountain Gorillas – a seminal experience that reinforced my belief that travel broadens the mind. At the time, this felt like the right thing to do, and a percentage of the money from the trekking permit went directly to the local community. In fact, the local guides told us that the best way we could help the gorillas was to encourage our friends at home to visit because local people now have a reason to protect their forest-dwelling neighbours from poachers.

Today, however, I am increasingly concerned that the carbon emissions from flying will contribute to destabilising the fragile habitats on which such endangered animals depend. Will their blood be on my hands? For some, this would simply be a case of moving on to another interest. But for me (and perhaps you), this is my life’s mission – to see the world. To give up on this goal feels like giving up on life. Potentially long-term, if I reach retirement age in good health, I may have the time to travel the world slowly by train and bus, but this isn’t an option now whilst I am running my own business. I also have concerns about off-setting carbon emissions (not that it is a bad thing to do in itself) – but do we have time to wait 25 years for a tree to grow and absorb all the carbon emissions from a flight taken today?

So rather than thinking about what I can’t do, I started thinking about what I can do with minimal impact: explore the landscape on my doorstep. After a chance meeting with a project officer at Natural England who is responsible for creating the new England Coastal Path along much of the east coast, I discovered that the section close to where I live in Newcastle upon Tyne had recently been opened creating much better access around old industrial areas north of Blyth. So, after a busy month of work in June (verifying the carbon emissions of train operating companies), last Monday morning, I caught a bus from the end of my street to Blyth and started walking north.

The last time I made a long-distance camping trip was when I was at school in the early 90s, so in order to save my ailing back, I cut down on weight by ditching the tent and borrowing a bivvy bag from a friend. I walked and walked with dunes on my left, sea on my right, and sand underfoot – ultimately it became a kind of meditation. As I left the industrial landscape of Blyth and Lynemouth Power Station behind, I passed fishing villages, castles and islands. I made slow progress, about 14 miles a day, because the landscape was unrelentingly beautiful with the view changing at every headland, the wildlife excitingly diverse, and I stopped to swim in the sea or a river every day.

Along the way I saw dolphins, puffins and clouds of butterflies. Farmland birds such as linnet and stonechat that I feared were vanishing in England were as common as sparrows. Despite dire reports of a lack of hirundines this spring, I was delighted to be surrounded by whirls of swifts and swallows for much of my journey, and even passed a colony of sand martins burrowing into the dunes. The wildflowers were stunning: drifts of bloody cranesbill, red and white campion and bee-covered clover that stretched for miles and miles – in some places the dunes looked like they were on fire. 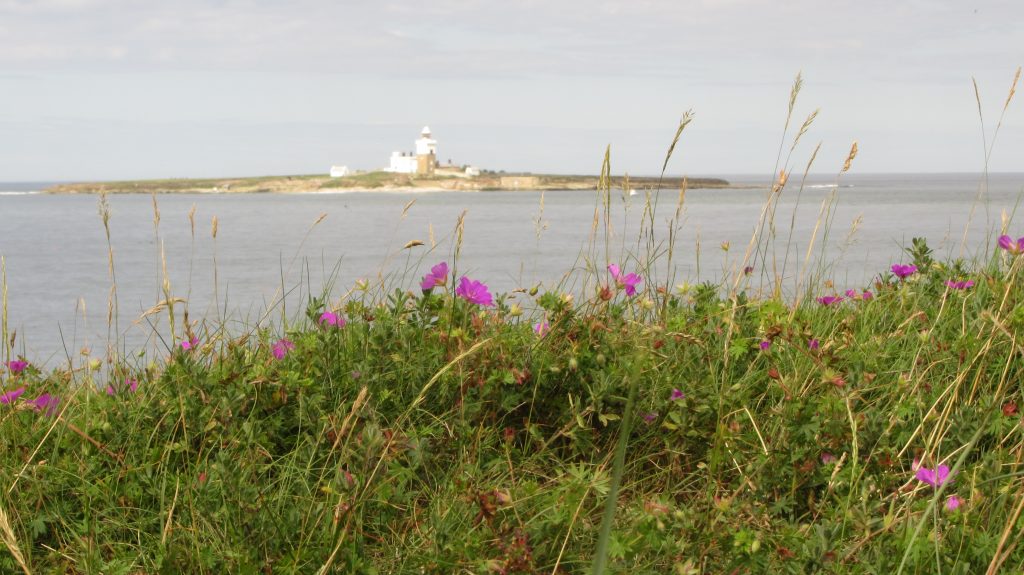 Once, I woke up in the middle of the night lying on a cliff-top meadow. As my eyes slowly adjusted, I was greeted with the sight of hundreds of stars, not thousands, because even at that unknown hour there was still a milky glow from the midnight sun that was skirting just below the horizon, casting an eerie light on the ruins of Dunstanburgh Castle to the north. I lay there listening to the rumble of the waves below and the occasional chattering of Kittiwakes on the cliffs. Sunrise the following morning, just after 4am, was sublime.

I also experienced a degree of adversity: swarms of midges rising up around dusk while I was attempting to cook noodles on my stove, intense back pain on the first couple of nights as I discovered that the ground had got a lot lower over the last 20 years, and a deep chill setting in early each morning as my light-weight sleeping bag offered little protection from clear Northumberland nights. 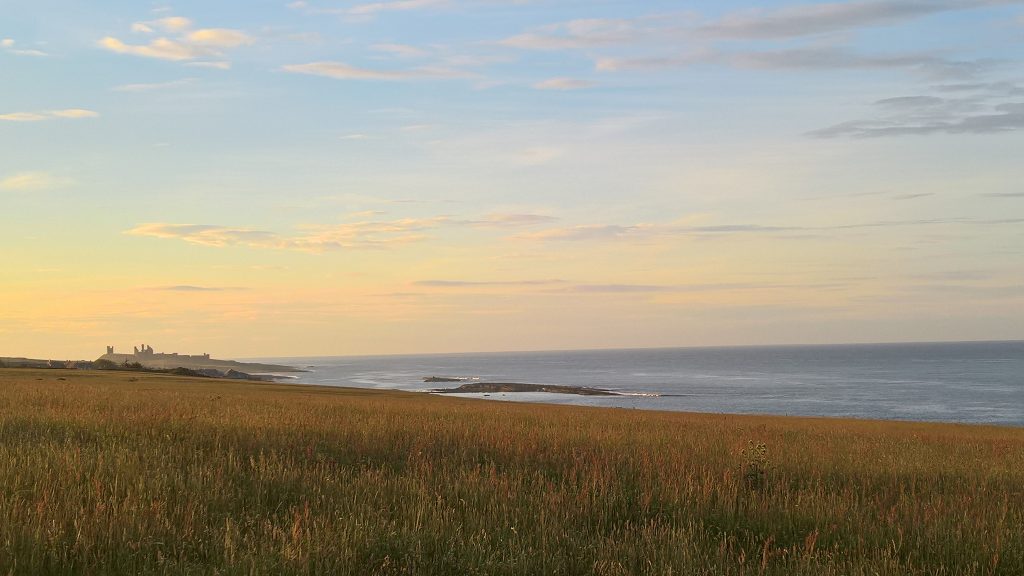 View of Dunstanburgh Castle from my bedroom

Towards the end of my trip, after five days soaking up the sights and sounds of the Northumberland coast, I was greeted with a view of the Holy Island of Lindisfarne across the vast white sweep of Budle Bay, stranded rivulets of water shimmering in the morning sunshine, and birds fishing in the river meandering through the estuary. I sat on a welcome bench and felt like I had completed a personal pilgrimage through this beautiful landscape, that I have visited on day-trips many times since I moved to Newcastle in 1993, but never really absorbed into my soul.

To conclude my low-carbon adventure, I walked inland from Bamburgh to Belford where, after being harassed out of a field by a bull and herd of angry cows, and safely traversing the east-coast high-speed railway line I was able to catch the bus back to Newcastle for about £7. The travel-related carbon emissions of my trip were around 12kg of carbon dioxide equivalent (or about 1% of a return flight to Spain).

In writing this account, I am not pointing the finger at anyone who travels long distance for work, to visit friends and family or for holidays, because I would be equally pointing at myself. Neither am I making a pledge not to fly again. Instead, my purpose is to celebrate the alternatives to long-haul travel that can be as equally rewarding and enable us to put down deeper roots where we live. 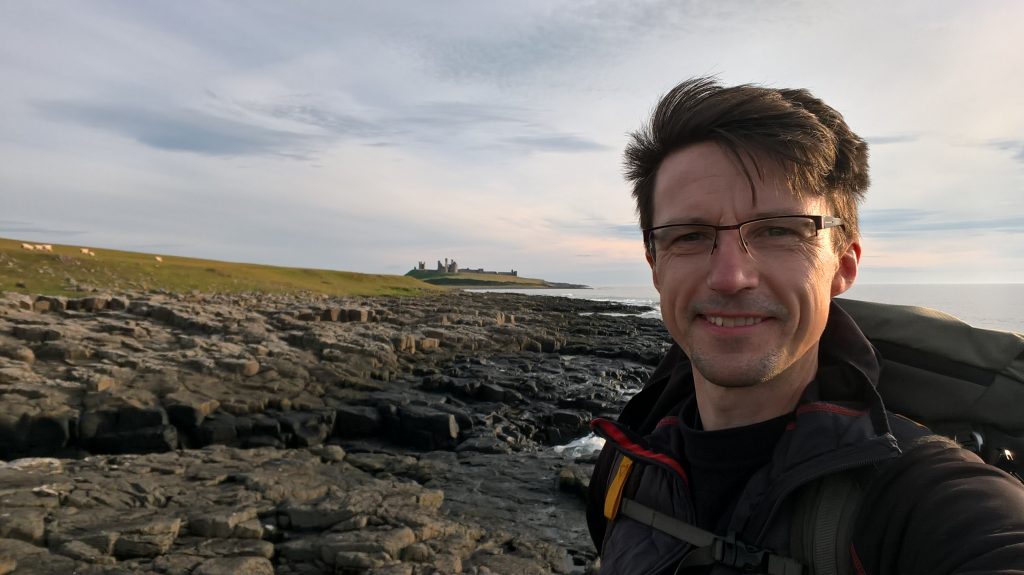 Full bird list (for those who are interested) – as seen from the coastal path in order heading north from Blyth (plus two minor diversions at Hauxley and Long Nanny).

12.   Curlew (reasonably common in fields up the coast) 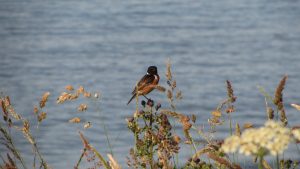 44.   Kingfisher (saw one in R. Coquet behind Warkworth)

46.   Grey Partridge (in football field / edge of field of crops between Warkworth and coast)

66.   Yellowhammer (just one, near golf-course just north of Dunstanburgh) 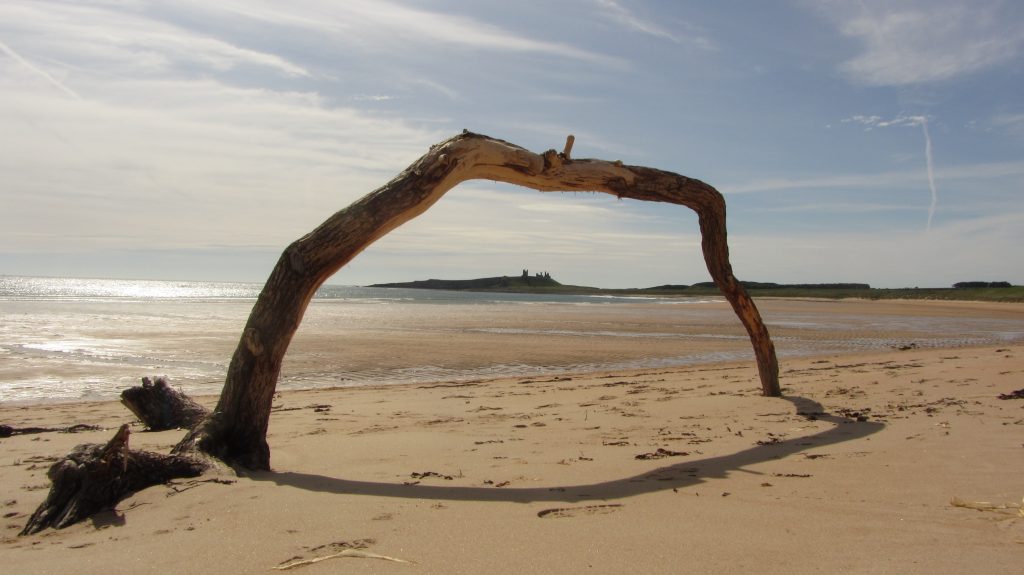 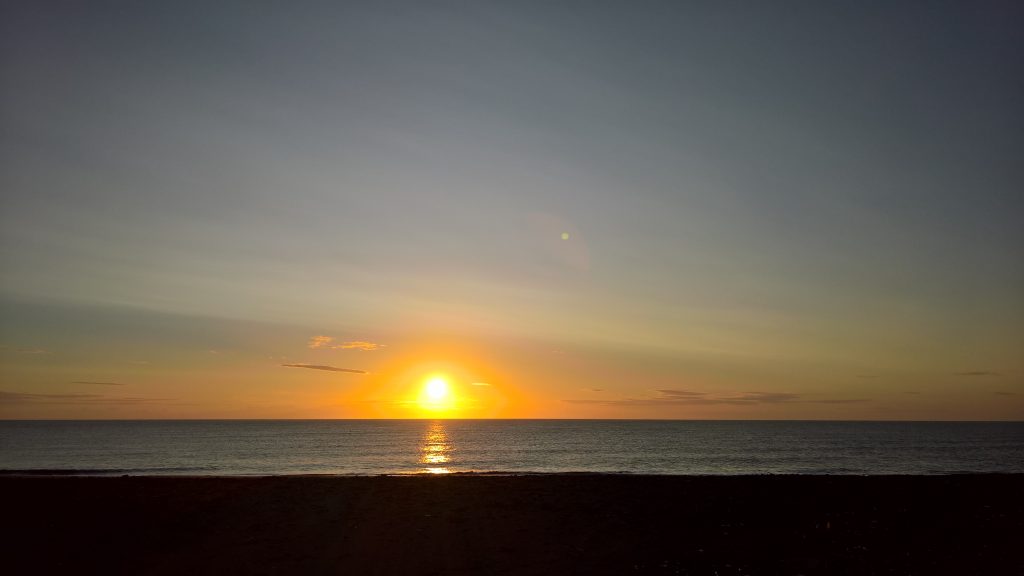