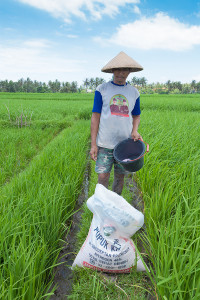 In my mind few issue are of greater importance that how to feed 7-9 billion people without degrading the air, soil, water, and climate on which food production systems depend. Two main schools of thought are greater intensification vs organic. Intensification is associated with larger farm sizes, mono-culture, increased mechanisation, increased use of fertilizer, and hi-tech such as GM crops. Organic farming practices are usually more labour intensive, often more diverse in terms of crops / livestock, reuse more nutrients within smaller farm systems, and obviously don’t use externally generated fertilizers and insecticides.

Whatever the environmental benefits of organic it is widely agreed (and mentioned by Porritt) that organic yields are lower and there is not enough land to feed the world without any application of fertilizer. I was therefore interested that this debate was not termed “intensification versus organic”, but “sustainable intensification versus low input farming“. The result was actually that Porritt and Atkin agreed on much such as hi-tech farming methods, eating less meat, and even the cautious use of GM crops was volunteered by Porritt. Towards the end of the debate it almost seemed to be a case of fighting for rational middle ground with calls for greater knowledge and research from going down well in the university setting. However in the summing up differences were spelled out especially by Porritt who stressed that environmental impacts associated with food production should be properly costed, small farms are more productive than large, and more people globally should be engaged with farming. Atkin’s motto was “Get more from less” in order to feed growing city populations, and this has to be done on scale using ‘sustainable’ methods such as bio-controls, seed treatments, precision use of fertiliser, GM / hybrids, and greater monitoring to reduce and refine the use of sprays.

By the end a disagreement about the value that city farms and vertical farming could have to play in feeding large populations in urban areas exposed deeper philosophical differences between the two speakers; science-driven big business solving the worlds problems vs  the capacity and creativity of individuals to help themselves if empowered and given the knowledge and tools.

A fascinating debate, and I will go away and explore the research to which Porritt referred that small farms are more productive than large (surely he wasn’t referring to my beleaguered allotment!)